It seems like Spain is getting cooler and cooler nowadays in Korea. More and more people interested in learning Spanish, more academies, more Spanish restaurants, more Koreans traveling to Spain, even flamenco is starting to get popular, and after his success in other Asian countries like Japan, it is very rapidly gaining popularity here. The last thing related to Spain that I have seen here is this new promotion by Domino’s Pizza Korea, which has recently launched a promotion with the name “Hola Spain”.

This advertising campaign is one of the most aggressive that I have seen here in Korea, using the beautiful Korean actress Ye-Seul Han, with commercials on TV, leaflets, and even completely changing Domino’s Korean website. 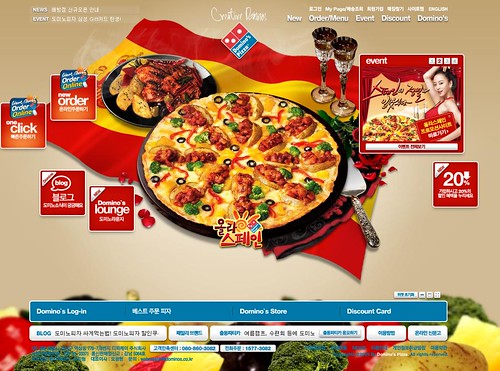 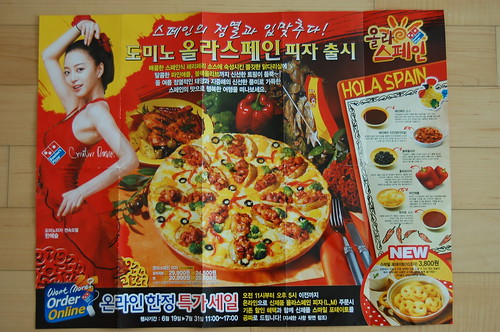 The leaflet that I got delivered to my home.

As you can imagine, I couldn’t resist trying a “Spanish pizza” in Korea… I was expecting a pizza tasting like cured ham, chorizo, sardine… even gazpacho flavor would have been quite cool. But the truth is I didn’t find anything like that. The ingredients: piri-piri sauce, spicy chichen, olives, bell pepper, pineaple and tomato sauce… so spicy that I could just have a couple of bites… 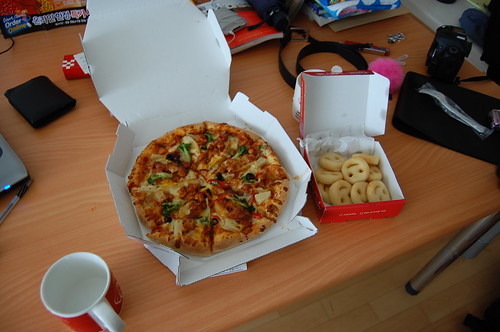 …luckily enough, some smiley fries were there just to make my day 🙂

Notice: If you are in Korea and want to try this pizza, you better hurry, the promotion finishes this July 19th. I hope you are good at spicy food. I’m not that lucky.